Making Utopia: London has been a challenge: balancing a low budget with the need to find a distinct visual language to express the sensation of the city. We decided at an early stage to mix visual textures to capture the feel of the story - blending video, film, archive and timelapse footage.

The video footage was largely shot using a Cinevate Brevis 35mm adapter. This device allowed us to mount still camera lenses onto our video cameras and allowed us to control the depth-of-field of the final image. This is often done to achieve a "film" effect - but not here. For Utopia: London we wanted the adapter's selective focus as a way of gaining greater creative choice in the pictures–elements of the image can be isolated in focus, while blurring the cluttered foreground and background.  It’s much less "noisy" than video, which leaves almost everything in focus. This seemed a particularly valid approach for a film about modernism – a movement dominated by clean lines and order.    In practice it can be hard work.   Shooting with such shallow DoF for HD makes focus critical – while the images can be beautiful - this at time challenged our rapid “on the hoof” approach to documentary. 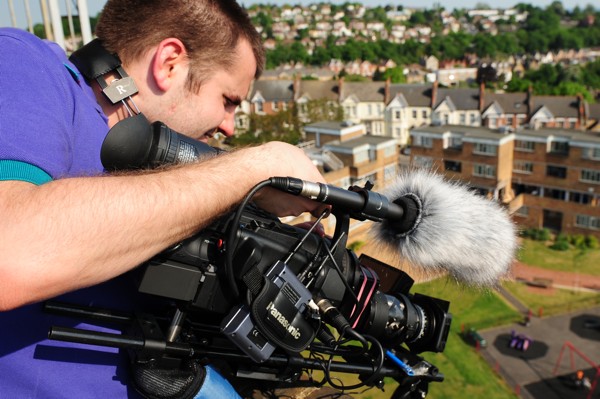 We also needed to move through the spaces of the city - too much of our perseption of architecture is based on static photography - yet in experiencing the city we do not stand still. Rather we explore its spaces, moving through, around over and under its fabric. For this reason we made extensive use of Steadicam to let the camera penetrate space.

To display the cityscape on a grander scale, we shot hundreds of timelapse shots. Here we used Nikon digital stills cameras, after months of tests to determine the right combinations of filtering, exposure and shutter interval. We also developed mechanical devices to allow camera moves during the timelapse sequences. Timelapsing takes at least minutes and often hours, but gives the feel of the anthill mania of the city, while at the same time emphasising the monumental quality of the built environment.

The final texture of the footage that we originated was the use of Super 8. New high speed film stocks and high definition telecine revolutionise this vintage format - and the advantages for the filmmaker are huge. No need to carry bulky equipment and seek filming permits - the camera fits in a pocket and works as simply as a stills camera. The images have a fantastic living grain - the texture and colour tones bringing the concrete and brick of the city to life. Traditional problems with image jitter can now be solved with advance software plugins. Justin Lovell at Framediscreet in Toronto has brilliantly transferred this footage to digital.